The History of Otaki Museum - By Len Bayliss

Otaki`s Main street is dominated by then Otaki Bank Heritage Preservation Trust building .This was  bujlt in 1918 as a Bank of New Zealand  branch  and sold  to the Otaki Borough Council in 1965. However the building became vacant when the Borough  Council was abolished in 1989 when its  functions were  taken over by the newly established  Kapiti Coast District Council.


The New Council was not able to rent or sell the deteriorating  building  a problem which   occasioned increasing concern ..However thanks to the efforts of Anne Thorpe, who mobilised strong local support the Trust was inaugurated in 2003 thus ensuring both the establishment of the museum  and the buildings preservation.


The building has since been awarded  historic status, a Preservation plan by a recognised authority  has been formulated and both the external façade and unique interior have been successfully refurbished. In addition there have been several  exhibitions every year attracting numerous visitors, a substantial collection of local artefacts has been acquired, whilst much historical research has been undertaken including many Oral history interviews. Currently the Museum is cooperating with the local Returned Servicemans Association together with other Local and National organisation in planning a major 2014 exhibition reflecting the centennial of the 1914/18 war.

The success of the museum over the last ten years largely reflects financial support from the Kapiti Coast District Council, from the Otaki community and from charitable organisations. Even more important has been the dedicated contribution of its elected trustees supported by many local volunteers and friends.

Around the World in Otaki - Part 2

My last blog post, Around the World in Otaki  was so popular, I thought I would create a part 2.  Otaki and Te Horo have some beautiful ... 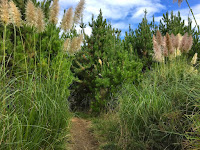